Ashmedia is a character in Trillion: God of Destruction.

Another cousin of Zeabolos. As Overlord, Ashmedia holds the Crest of Lust.

She calls Zeabolos “little Zeabolos,” and has fun with him in a teasingly seductive fashion. She posseses a particular kink where she becomes excited by hearing a dying foe's cries, and undertakes defeating Trillion while shivering at the thought of the pleasure she’ll feel from the death of such a giant enemy.

Living up to her Crest of Lust, Ashmedia is portrayed as sensuous and flirtatious and acts accordingly, almost always speaking with innuendos and even teaching the innocent Perpell lewd concepts, much to the ire of her cousin Zeabolos. However, unlike what she represents, she is in reality a pure girl as demonstrated when Zeabolos forced her to hide under his covers; It made her misunderstand what Zeabolos' intentions were and making her unnaturally flustered when Zeabolos was teasing her. While she enjoys making Zeabolos befuddled, she in fact loves and cares for him a lot. The biggest evidence of the fact was in her route's ending, she sacrificed her soul in place of Zeabolos'.

Each gift shows an event the first time it's given to Asmedia and the player receives 1,000,000 affection points and 25% heart points.

Ashmedia is a beautiful woman; she has long pink hair, with her bangs covering the right side of her face and with it, her right eye where her Crest is located. she has 2 different horns, a Ram-like horn on her left side, and a ox-like horn on the right.

Her overall clothing is made to match her Crest of Lust. Her clothing mostly consists of a black costume with nothing but a red bra, red and black wings, and pink fishnet stockings with black belted boots.

Zeabolos (Cousin)- Ashmedia refers herself as an older sister to Zeabolos despite not being his sister. She has been known for putting weird stuff into Zeabolos' drinks on many occasions and calls him "kiddo." Since Ashmedia is older than Zeabolos, she is one of the few people who know about his childhood. (Baphomet, Ashmedia, Fegor, and Lilith know about Zeabolos' childhood.)

After Ashmedia became an Overlord, the position of Great Overlord was determined by power rather than lineage.

Faust - During the story arc, it is revealed that Ashmedia likes haging around with Faust, while Faust actually doesn't mind her company, unless she disturbs her in her research and studies. In her "Alt Ending". Faust even stated that she is sad that Ashemdia is sacrificing herself to take Zeabolos' place in their contract.

In her character route's ending, after defeating Trillion and returning, everyone cheers for her. Zeabolos hugs her out of worry and thanks her for letting him see her for one last time, confusing Ashmedia. Zeabolos announced his deal with Faust of exchanging his soul for services rendered, to everyone's shock and protests. Zeabolos commands assures them he willingly accepted the deal and commands them not to follow him and Faust as they go to commence the ritual. As Faust shows doubt in wanting to proceed with the ritual, Ashmedia barges in the room to Zeabolos' shock. She asks Faust, if they could find an alternative way to fulfill the contract whilst letting her cousin to live. In the end, she offered her own soul as a substitute. Zeabolos protests and refused the notion but in his weakened state, Ashmedia easily incapacitates him. Faust expresses her regret and her desire to not see Ashmedia lose her soul in such a way, but the seductress instead shows her purity of wanting to give up her life for the one she loves.

Years pass with Zeabolos still grieving over Ashmedia's passing. However, from out of the blue, Faust appears and reports to the inhabitants of the castle that her plans were accomplished and was able to bring back Ashmedia, surprising Zeabolos. To his dismay, Faust informs him that even though she was able to bring her back, it was only a fragment of her soul that was left, leaving her as a "living doll" with no memories. Nevertheless, Zeabolos is at least thankful that she is home.

Over a period of time, Zeabolos repeatedly brings Ashmedia to the garden where they planted the Sephirot tree, but to no avail, Ashmedia retains her doll-like features. Zeabolos laments that the Sephirot has not bloomed since Ashmedia had left the first time around but he hopes that the flower will blossom fully one day for Ashmedia to see. Suddenly, one of the buds blossoms to a full flower, answering his prayers. At the sight of the flower, Ashmedia slowly becomes responsive and gets her memories back, much to Zeabolos' joy. The two lovers fulfill their promise of confessing under the Sephirot tree as they hugged and finally greeting her "Welcome Home".

Add a photo to this gallery

Ashmedia in the Hot Springs

Ashmedia's first moment of sleeping with someone

Screenshot of Ashmedia, without her memories in her "Alternative Ending"

Screenshot of Ashmedia, regaining her memories in her "Alternative Ending"

with Zeabolos in her "Alternative Ending"

"True Ending"
Add a photo to this gallery 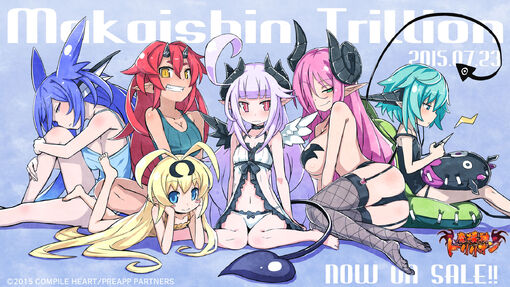 Levia, Perpell, Mammon, Ruche, Ashmedia, and Fegor in the developer's fanart of the game's release date 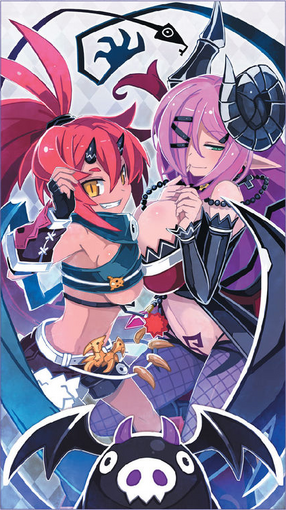 Ashmedia with Mammon in the Official Art
Add a photo to this gallery
Retrieved from "https://trillion.fandom.com/wiki/Ashmedia?oldid=1128"
Community content is available under CC-BY-SA unless otherwise noted.