Faust is a character in Trillion: God of Destruction.

The girl who saved Zeabolos with the power of the Soul Grimoire. After acknowledging his unmistakable defeat, she made a deal to lend him the power to overthrow Trillion in exchange for his soul.

She is pragmatic, mostly serious, and very tight-lipped about her identity. She conducts mysterious research in her lab and has invented a variety of items in order to defeat Trillion.

Since the beginning, Faust was shown to be a very distant woman. She only spoke factually and was very aloof in every situation, even after the death of the Overlords, almost mechanical. However, as she spent more time with the people around her, she slowly mellowed out and started to care for them and even started to show some doubts about taking Zeabolos' soul. She comes to care for the Underworld and even almost dies when siphoning her magic powers into the Gem of Love. On her character route, she even willingly decides to become an Overlord to try and defend an Underworld unrelated to her, even with the risk of dying.

Each gift shows an event the first time it's given to Faust and the player receives 1,000,000 affection points and 25% heart points.

Faust is a necromancer, with black hair and yellow eyes. Her clothing consists of a great white coat with a grey clothing inside and a red tie, she also wears black stockings and boots, she also has a hair pin which has the looks of an "Inverse" cross or a magician hat. Red Tie comes with Skeleton Mark.

Zeabolos - Faust is a mysterioius who Zeabolos trusts and respects. She revived him and patched him up after getting torn apart by Trillion. She is the only person who knows how to deal with it but only in exchange for his soul. Zeabolos and Faust both similiar motives and mutually benefit from each other; Faust will keep Zeabolos' soul in exchange for her knowledge of defeating Trillion. Zeabolos would rather take the blame than put it on Faust when Ruche ridicules Faust.

Ashmedia- During the story arc, it is revealed that Ashmedia likes haging around with Faust, while Faust actually doesn't mind her company, unless she disturbs her in her research and studies.

In her character's route ending, the Underworld cheers for her success in defeating Trillion. Soon after, Zeabolos finally reveals the contract they made, surprising both Baphonet and Uriel. Zeabolos orders them not to interfere as his final order.

In the chamber, Faust shows hesitation in following through, but Zeabolos encourages her to do so. Faust despairs, but Zeabolos tells her to be happy since her wish was about to come true. She instead agonizes, reminding him that she was going to take his soul. Zeabolos acknowledges it and reassures her that he would be by her side. As Zeabolos was drifting in nothingness, he hears Faust's cries, assuming it was her crying over his death. He finds out however, that it was her in the past, mourning the death of her father. Zeabolos realizes that he did not want to leave her alone despite wating her to accomplish her wish. He suddenly comes back to life, with Faust crying and admitting that she cannot take his life away for her own agenda. As Zeabolos gives her comfort, Faust's Grimoire glows and emits a light that envelops her with warmth. Faust remarks that it felt like her father's soul, leading Zeabolos to ask her what it was she wishes for. She cries, confessing that she has lost everything in her past and does not want to lose Zeabolos to the past as well. She keeps crying, but this time, with tears of joy. Zeabolos tells her to cry it all out, and once her tears dry, they can make a new contract.

Years passed and Zeabolos makes her "The Underworld's Prime Minister", she was seen speaking to Uriel about taking a seat in there "discussion", to which Zeabolos thinks it is a bad idea in the first place. After the discussion, Uriel takes Faust and dresses her in her wedding gown, the Underworld celebrates the new contract between Faust and Zeabolos, he asks her hand for marriage, the crowd applaud and admires Faust beauty in her wedding gown, to her embarassment, but Zeabolos admits she was always beautiful. They both made their vows as they enter their new life together as husband and wife.

No Coat Back View

No Coat Side View 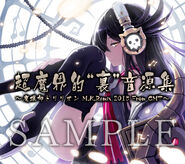 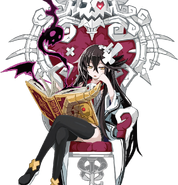 Can be seen in the opening

Faust's Hot Spring scene
Add a photo to this gallery

Faust_(Trillion:_God_of_Destruction) on the Heroes wiki.

Retrieved from "https://trillion.fandom.com/wiki/Faust?oldid=1120"
Community content is available under CC-BY-SA unless otherwise noted.