Ruche is a character in Trillion: God of Destruction.

Zeabolos’ niece, Perpell’s older sister, and the Overlord who holds the Crest of Pride.

She looks down on Zeabolos after his defeat, and undertakes fighting Trillion so she can become the Great Overlord and rule over the Underworld. Having received advanced education from a young age, she is very proud, selfish, and domineering.

Being the Overlord of Pride, Ruche shows a great deal of self-importance. However, her real personality reveals her as a caring person; She constantly watches out for her little sister, Perpell, and was shown to be knowledgeable about taking care of sick people as a product of taking care of her deceased sickly mother. She is also very responsible as she would take care of the graves of the overlords and would lay down flowers for them. She also shows a great deal of inner strength as shown when she did not shed tears when her father and her little sister died, but instead put on a brave front.

Each gift shows an event the first time it's given to Ruche and the player receives 1,000,000 affection points and 25% heart points. 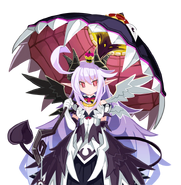 Great Overlord Ruche
Add a photo to this gallery

Ruche on the Heroes wiki.

Retrieved from "https://trillion.fandom.com/wiki/Ruche?oldid=1104"
Community content is available under CC-BY-SA unless otherwise noted.