Zeabolos is a character in Trillion: God of Destruction.

The protagonist of the game, and the third Great Overlord to reign over the Underworld. He is a passionate leader who fearlessly fights for what he believes in.

He was killed in the battle against Trillion, but shortly before his soul joined the dead, he was saved by entering into a contract with the necromancer Faust. Though his body is patched together, losing his powers that he had before,
he remains the undisputed leader of the Underworld with overwhelming support from his citizens.

The throne of Great Overlord used to be inherited by direct descendants of the 1st Great Overlord Satan. Azel was the 2nd Great Overlord and Zeabolos' father, he was considered to be very kind but weak when it comes to fighting. It was a coincidence that the most powerful Overlord was the son of the Great Overlord and they decided that the status should be determined on power because Azel had many kids.

Zeabolos planned on serving his father and was hoping that his brother would become to next Great Overlord but never expected himself to become one. He gained rights to the throne right after he defeated the Archangel named "Michael," one of Uriel's allies.

Before fighting Trillion, the first time Zeabolos felt that his powers were matched was when he was fighting an Archangel from the Heavens named Michael.

Michael was an Archangel who was defeated by Zeabolos in a very intense battle. Even as an enemy, Zeabolos described Michael's swordsmanship as being "graceful as if he was dancing". Uriel states that he was considered the most beautiful and strongest out of everyone in the Heavens. Defeating Michael was something that Zeabolos is very proud of and he honors his death for being such a graceful and powerful opponent.

Zeabolos and Michael took several hits from each other and Michael delivered a serious blow to Zeabolos' throat that gave him a wound deep enough to spray blood all over the field. Even though Michael inflicted serious injury on his opponent, Zeabolos' blood spreaded onto his eyes and left him open for a chance to deal the final blow onto Michael's chest. Michael's last words to Zeabolos before passing away was "You have won this battle. Be proud that you have defeated Michael, and tell the tale to future generations."

Most of the main characters, aside from Faust, Levia, and Trillion, are related to Zeabolos.

Faust is a mysterioius who Zeabolos trusts and respects. She revived him and patched him up after getting torn apart by Trillion. She is the only person who knows how to deal with it but only in exchange for his soul. Zeabolos and Faust both similiar motives and mutually benefit from each other; Faust will keep Zeabolos' soul in exchange for her knowledge of defeating Trillion. Zeabolos would rather take the blame than put it on Faust when Ruche ridicules Faust.

Fegor and Elma are Zeabolos' sisters.

Not much can be said about Zeabolos' relationship with Fegor because they were often separated. Ashmedia remembers that Zeabolos and Fegor have taken baths with each other when they young. Even though Fegor has never killed anyone, Zeabolos estimates that her power rivals his own. While they were at war with the Heavens, Fegor has saved Zeabolos several times.

Elma is very polite, caring, and innocent by nature. Whenever something devastating or worrying comes up, Zeabolos might send her to her room because he's doesn't want her condition to become worse from stress. Zeabolos tells Elma stories of his battles with the Heavens and says that angels are very scary and respects how strong they were and how brave they have fought. Zeabolos compares her personality with Astaroth and coincidentally, she acquires his Crest of Gloom.

These two girls are his brother Astaroth's daughters with different personalities. Ruche constantly calls Zeabolos a wimp and claims herself to be suited for Great Overlord while Perpell is very naive and positive about the situation. Zeabolos has assigned their father Astaroth to guard the castle so he can take care of his daughters but the plan didn't work since Astaroth was always out helping out other people ever since his wife passed away.

Ashmedia refers herself as older sister to Zeabolos despite not being his sister. She has been known for putting weird stuff into Zeabolos' drinks on many occasions and calls him "kiddo." Since Ashmedia is older than Zeabolos, she is one of the few people who know about his childhood. (Baphomet, Ashmedia, Fegor, and Lilith know about Zeabolos' childhood.)

After Ashmedia became an Overlord, the position of Great Overlord was determined by power rather than lineage. 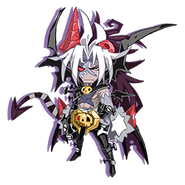 Website icon when counting down days until game release.

with Faust in her "Alternative Ending"

Zeabolos on the Heroes wiki.

Retrieved from "https://trillion.fandom.com/wiki/Zeabolos?oldid=1117"
Community content is available under CC-BY-SA unless otherwise noted.